by Operation Blessing Philippines | Mar 7, 2020 | Disaster Response, What We Do

An Eruption of Events

The Philippines is no stranger to calamity. In the past decade, the country has experienced super typhoons, floods, earthquakes, and even man-made calamities caused by fighting, killings, and bombings. The rise of social media has made images of disaster increasingly familiar to Filipinos. The speed of how news is consumed has made Filipinos respond more quickly and actively to events. Sadly, this same speed of news combined with how much content is consumed has also made it quicker for Filipinos to move from one story to the next.

When Taal Volcano erupted last January 12, it was as if the whole Metro was rumbled awake. PHIVOLCS, local government units, and NGOs scrambled to figure out how to catch up with the volcano’s activities while evacuating and saving lives. Impressively, private groups and individuals also immediately sprang into action as highways filled with vehicles traveling with donations and aid. Social media was abuzz with posts of calling out for aid and of how it was being given to those directly affected by the eruption.

In the next few weeks, however, as the alert level of possible eruption decreased, so did talk of aid for the victims of Taal Volcano. The news quickly changed as more social media concern focused on the presence of the coronavirus, while the welfare of those displaced by the eruption slowly faded into the background.

This was the situation when Operation Blessing teams began their house-to-house visits in Laurel, Batangas, last February. A month after the eruption, the news was dying down, but the struggle for the Batanguenos was just beginning. The once emerald Taal Volcano Island was now ash-white. Hundreds of families were still living in five evacuation centers, especially those whose homes were destroyed beyond repair by intense ashfall and earthquakes.

Operation Blessing spoke to the Human Resource Head of the Municipal Government of Laurel, Samson Noche, and to the Barangay Captain of one its most hit towns, Brgy. Gulod, Gregorio Serrano. Both echoed the same sentiments about the situation of their people. Now that the danger of a more explosive eruption was diminishing, the reality was that the initial eruption had put people’s lives at a complete standstill. There was no electricity, water was being rationed, homes were irreparably damaged, and even more daunting was the task of rehabilitating the city in terms of livelihood. Livestock, fishing, and tourism – their major sources of income could no longer be relied on. Eruption, earthquakes, and ashfall that happened within a day, had changed lives and the future of hundreds of people for years to come. 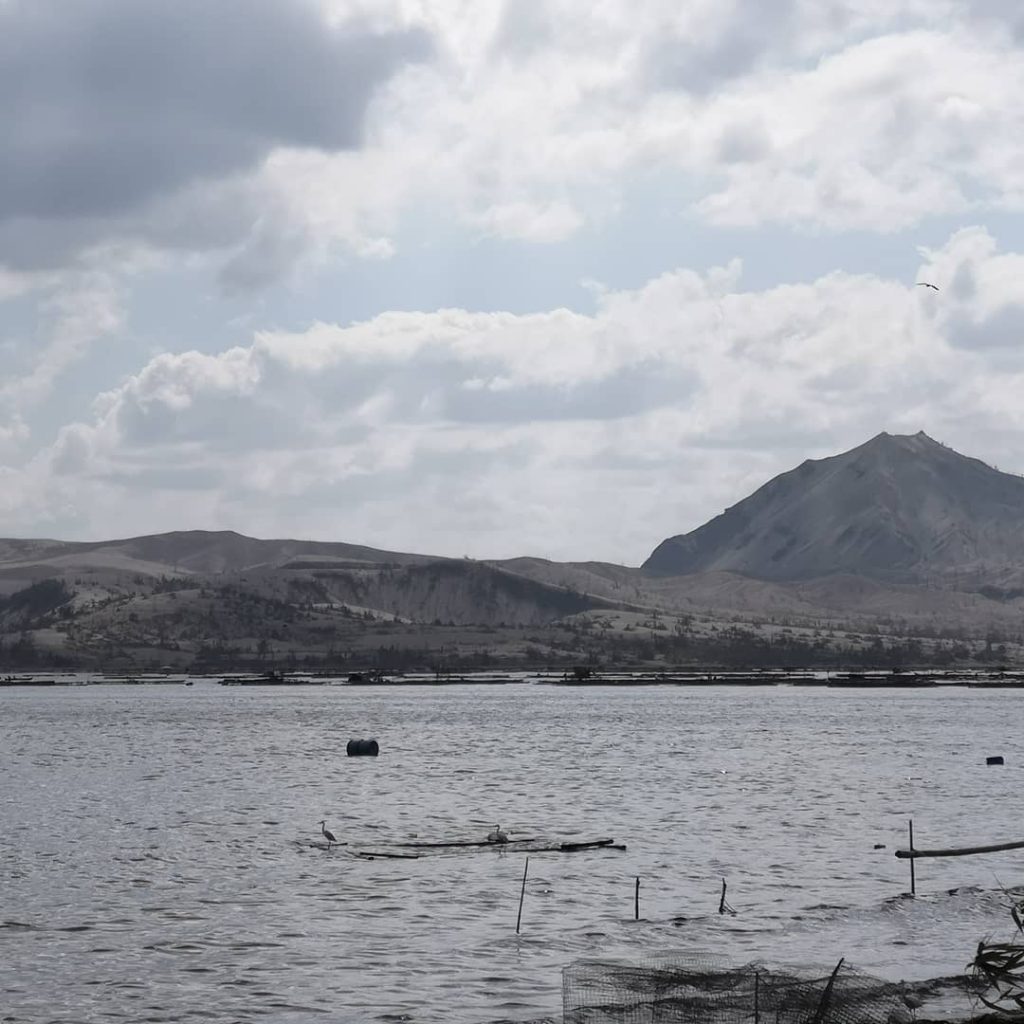 Seek Those In Need

For weeks after the eruption, Operation Blessing had conducted several disaster relief and medical missions within the cities most affected by the eruption.  But as general public concern died down, the call of God echoed stronger — to stay, seek out those in need, and reach out. With this call, OB formed teams to go inside the province’s most affected areas – into the fishing villages that lay a few kilometers from the volcano island itself. Walking through the villages revealed how much damage Taal Volcano had caused — collapsed homes, the faint smell of sulfur as layers of ash fall remained, fishing cages destroyed, yellowed animals as sulfur colored their once-white fur. 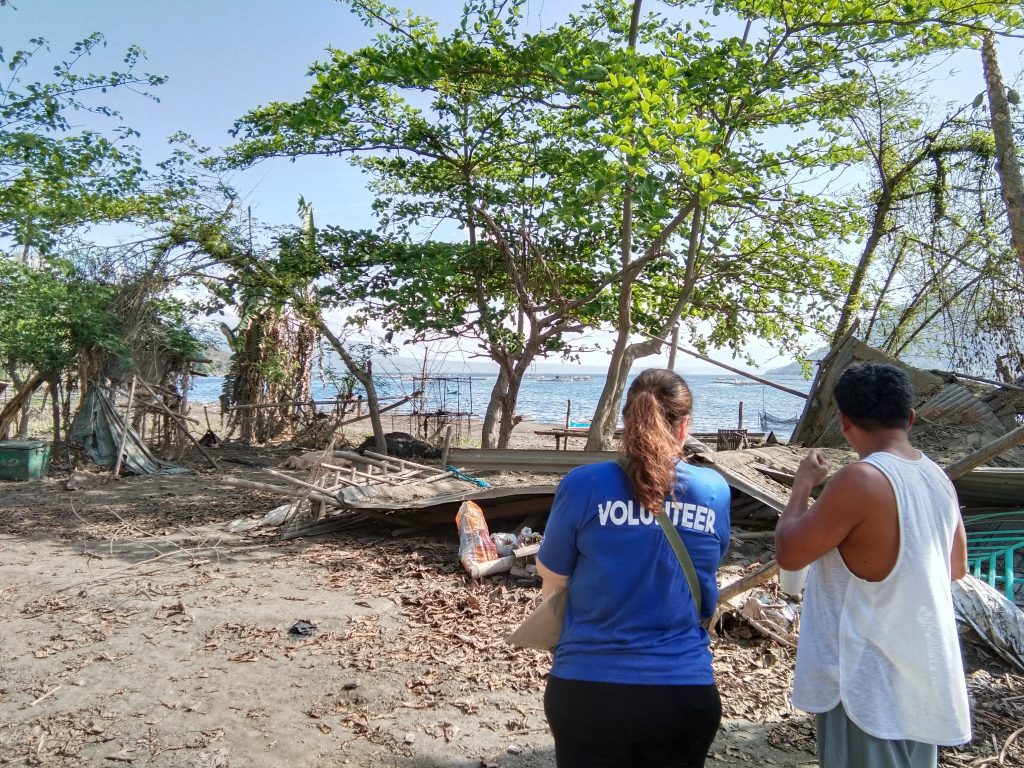 OB volunteer speaking to one of the fishermen of Sitio Kalabasa.

In Sitio Kalabasa, Brgy. Gulod, Laurel, what remained of the homes of Rose Ann Cabello, and her brother-in-law, Florencio Cabello, were now being propped up by large bamboo poles. Rose Ann smiled bravely as she showed the OB team the large crack that etched its way across a whole wall of her house. Similarly, Florencio smiled and posed as he showed the team an entire collapsed roof that remained unfixed and covered with ash.  Rose Ann said that they simply wanted the opportunity for life to move on, looking at her son, Jherick, who was playing by her side. 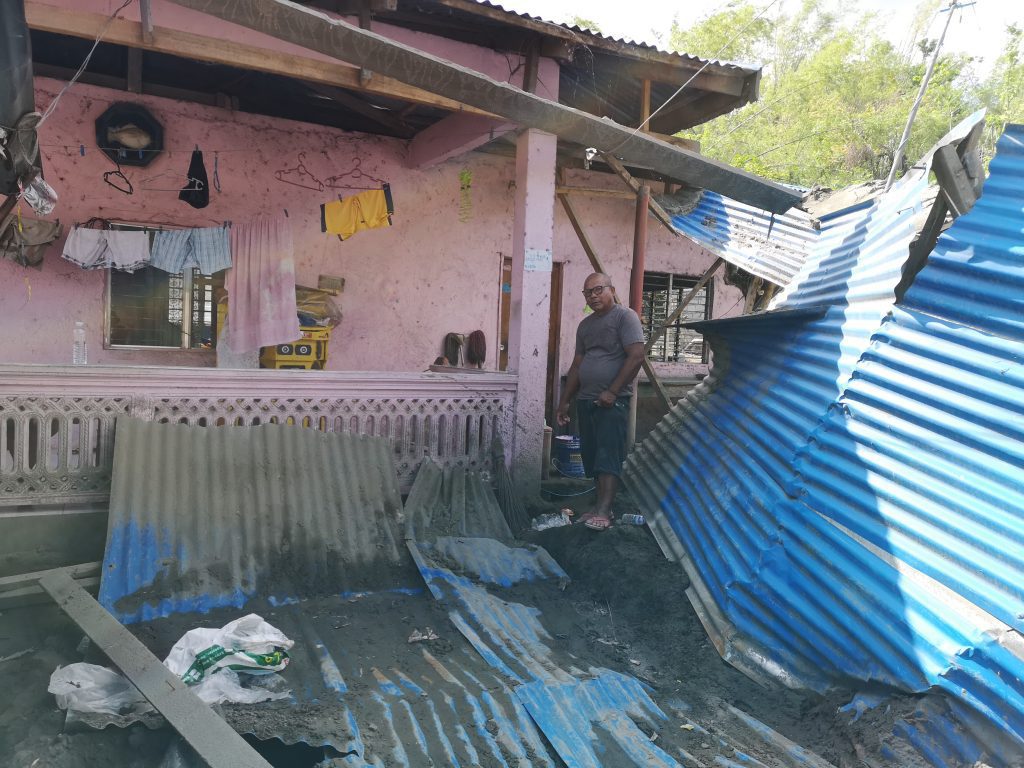 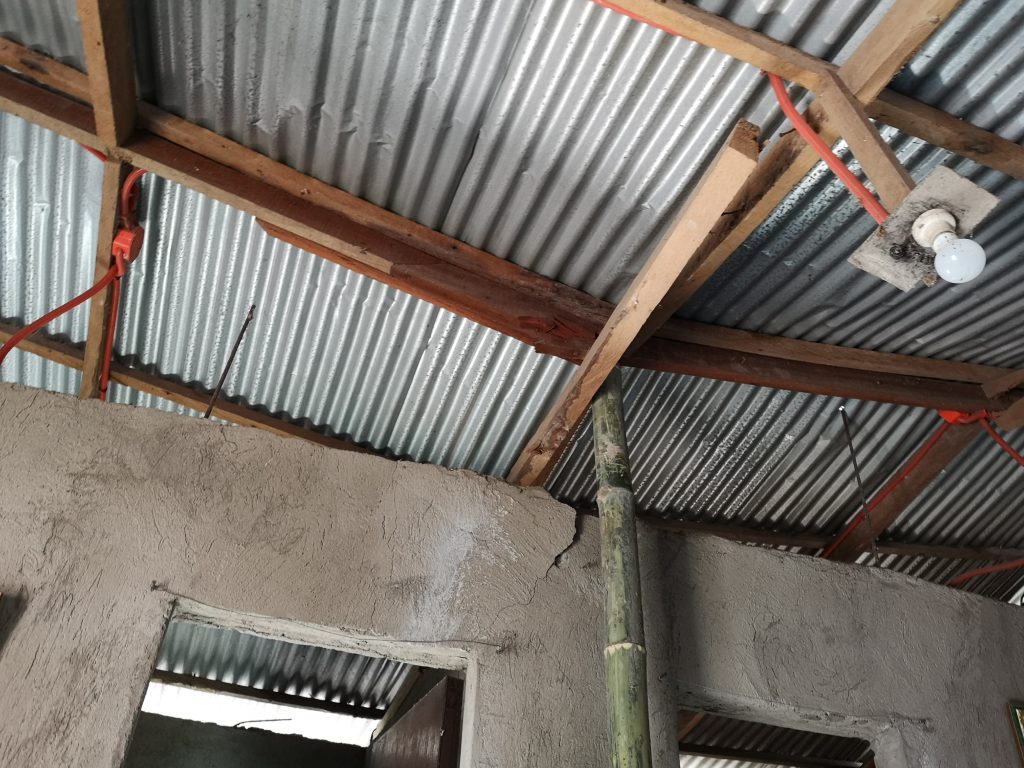 RoseAnn’s home now needs to be propped up by a bamboo pole. 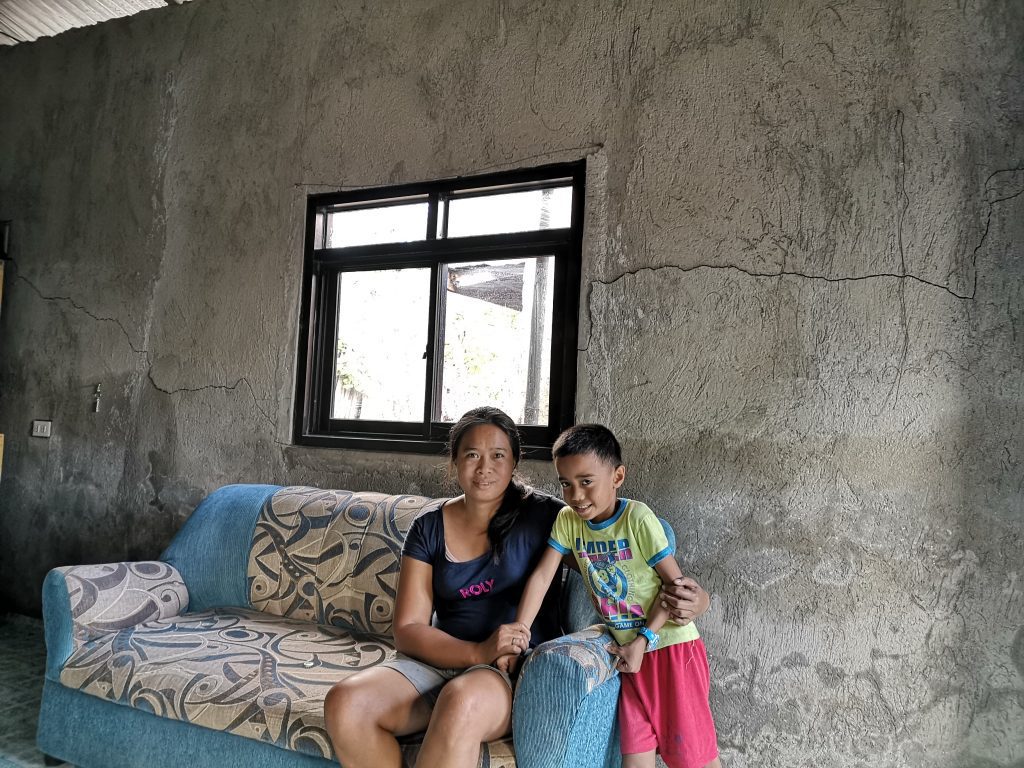 RoseAnn and Jherick smile despite damage and crack along the wall.

Operation Blessing moved from Sitio Kalabasa to nearby Sitio Bucal, bringing relief directly, speaking to villagers and hearing their stories.

In these days where presence and connection are usually measured by the number of likes and shares on a screen, to be inspired to move as Jesus did – visiting homes directly, hearing stories and empathizing with hardship – was a great gift of connection for the Operation Blessing team visiting, and for the people who had been displaced for weeks, and for the months to come.

Most of the villagers, while daunted by the seemingly impossible task that lay before them, shared their stories and expressed their gratitude to God that the eruption happened during the day, “Talaga pong inaalagaan kami ng Panginoon. Siguro po kung sumabog ang Taal nang gabi, wala na po kami ngayon.” (God truly cares for us. If Taal erupted at night, we most likely won’t be here today.)

They shared the hardship of fleeing their homes, living in evacuation centers, only to come home to futures they do not know how to begin. They knew that life outside was moving on, and so a close, personal visit from OB and a chance to share their stories made a world of difference. “Salamat po, at binisita niyo po kami dito sa amin. Kayo palang po.”(Thank you for visiting us here at home. You were the only ones so far.)

As the visit ended and relief goods were distributed, expressions of concern turned into smiles of gratitude. Eyes closed as hearts were opened to the offer of prayer by OB team leader, Pastor Rico. Poignantly, the day ended as villagers prayed with the ash-covered Taal Volcano in the background, some kilometers away. The day ended in hope as they recognized that in these times of trouble, although the outside world may seem to have moved on, God brought the Operation Blessing team to their homes to remind them that He always remembers. God never forgets. 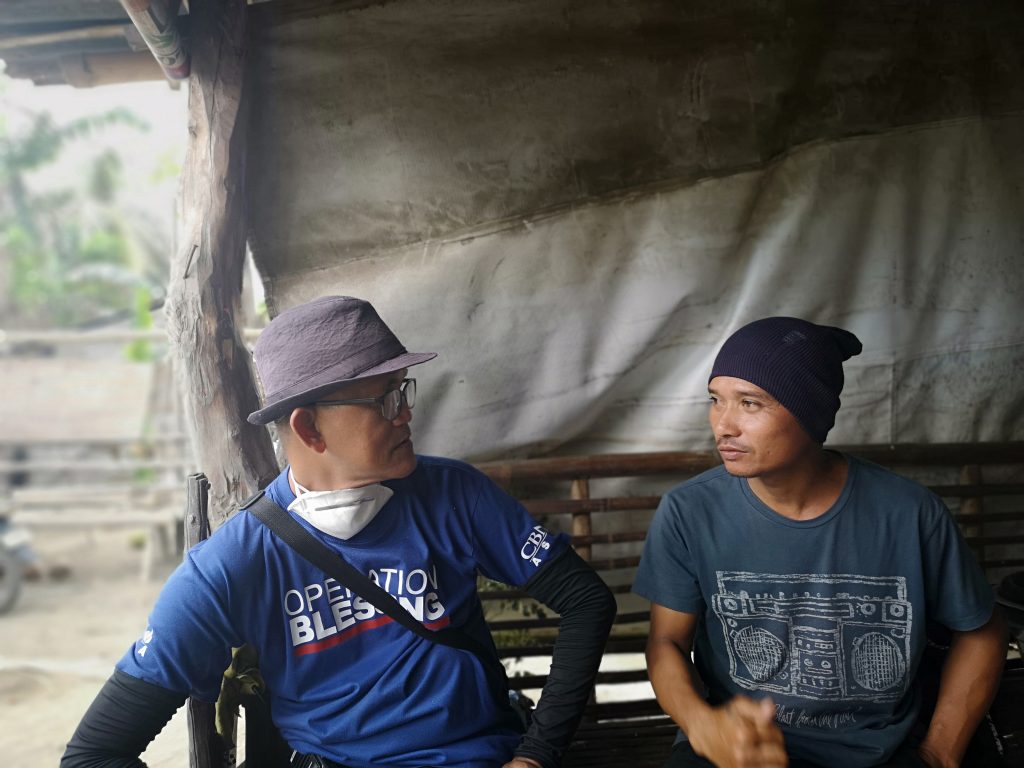 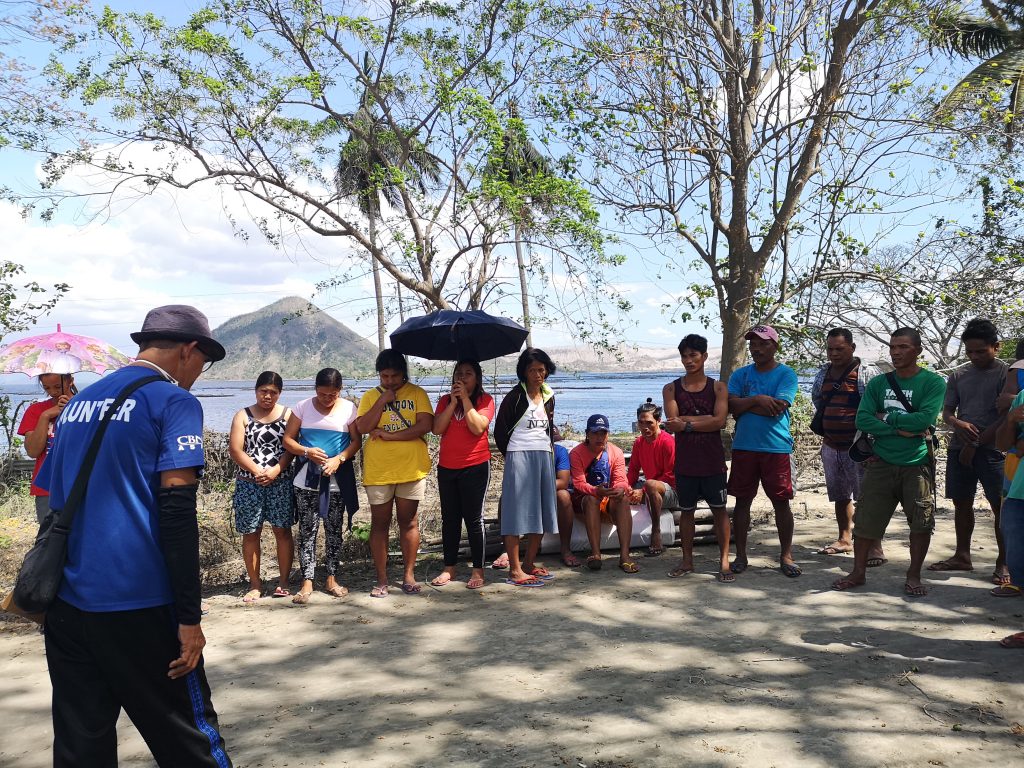 Praying with residents of Sitio Bukal, with Taal Volcano across the lake behind them. 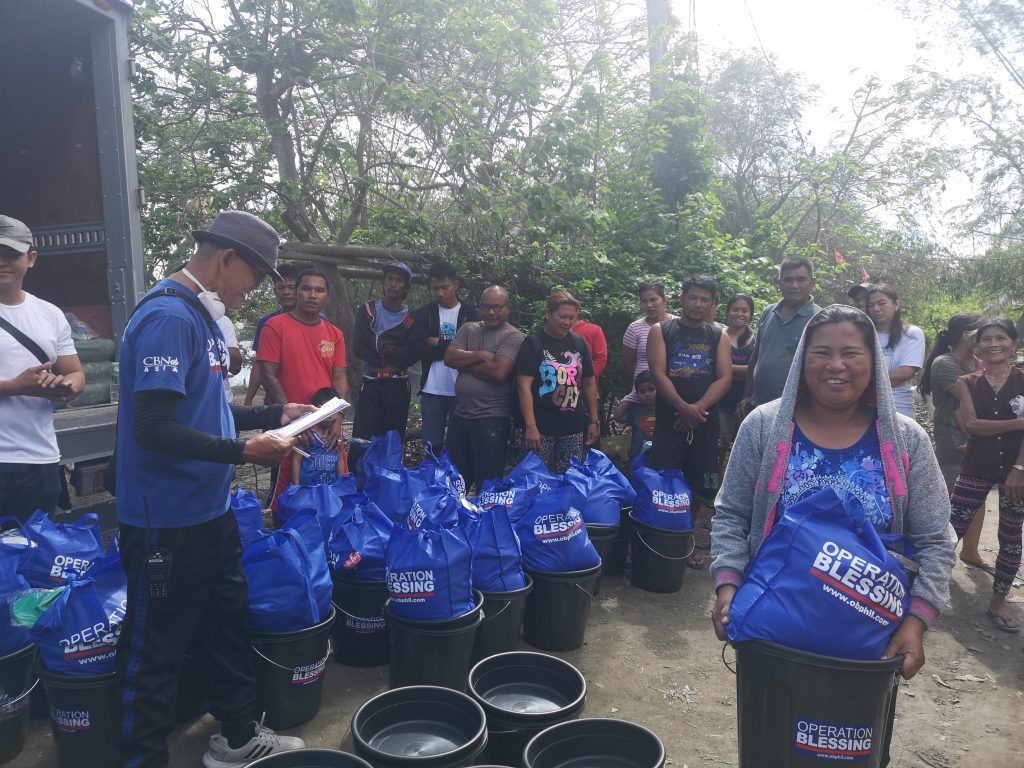